Thank you to Tracy Fenton from Compulsive readers  for organising this tour and to John Marrs, Penguin Random House Group  and #netgally for an ARC copy of this book in exchange for an honest and unbiased review. 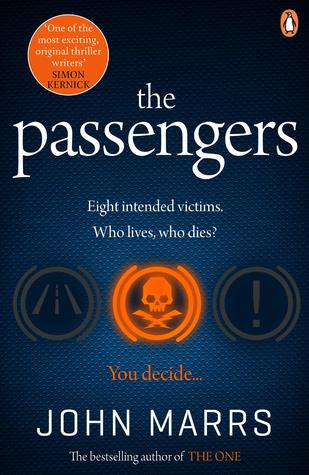 Eight self-drive cars set on a collision course. Who lives, who dies? You decide.

When someone hacks into the systems of eight self-drive cars, their passengers are set on a fatal collision course.

The passengers are: a TV star, a pregnant young woman, a disabled war hero, an abused wife fleeing her husband, an illegal immigrant, a husband and wife – and parents of two – who are travelling in separate vehicles and a suicidal man. Now the public have to judge who should survive but are the passengers all that they first seem?

What can I say?

Grab yourself a copy of this, strap in, buckle up and take a twisted ride with The Passengers.

The main plot is engrossing and addictive.  Short chapters and smatterings of information give enough away to keep the pages turning and the story intense but never enough to fully reveal everything.  Each character is introduced by revealing small amounts of information, making it easy to begin judging and thinking about who deserves to live or die – or so it seems.

As the narrative moves along at the same alarming rate as the cars themselves, more information is revealed about each character showing that not everything is all it seems.  The more information the reader receives, the more your thoughts and judgement are thrown into turmoil and it’s through this device that this book carries a powerful message.

Though the fictional plot is clever and compelling in itself, the true genius of this novel are the deeper and less fictional undertones that force some uncomfortable thinking and self reflection.  With the rise of Social Media, I’m pretty sure that everyone of us are guilty of keeping parts of ourselves hidden, the parts of us we feel make us look weak, vulnerable, undesirable or even nasty.  But what if others shared that information without consent or context?  How would we then be viewed by the public and the people we love the most?

On the other hand, how often do we judge others when only holding a snippet of the information or without seeing the whole story.  We take a moral stance on things that we can never fully know about.  How often are we wrong?  This novel is full of judgement both within the jurors, the passengers and other members of the public.

These themes combined with electrifying story telling make for brilliant storytelling and I highly recommend this book – it’s not to be missed.

John Marrs is the author of The One, The Good Samaritan, When You Disappeared, Her Last Move and Welcome to Wherever You Are.

A former freelance journalist based in London, England, he spent twenty-five years interviewing celebrities from the world of television, film and music for national newspapers and magazines until becoming a full-time author in 2018.

He has written for publications including the Guardian’s Guide and Guardian Online, Total Film, Huffington Post, Empire, Q, GT, the Independent, S Magazine and Company.

His books have been translated into twenty different languages and The One is soon to be a major new Netflix series.