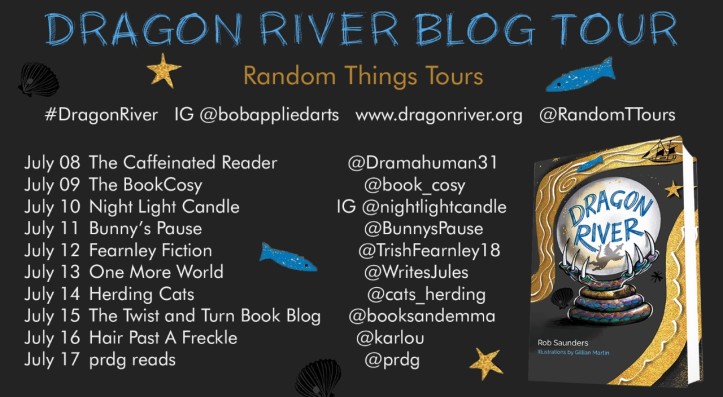 A huge thanks to Anne Cater for organising this tour and to Rob Saunders for an ARC copy of this book and a fantastic model of Gallo in exchange for an honest review. 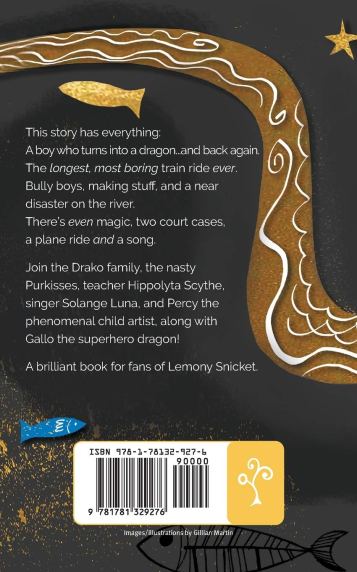 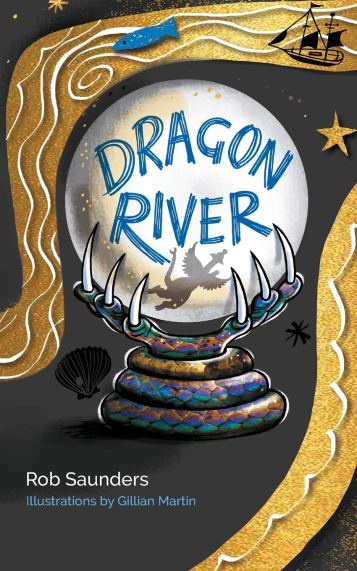 This story has everything:

A boy who turns into a dragon… and back again.

The longest most boring train ride ever.

Bully boys, making stuff and a near disaster on the river
There’s even magic, 2 court cases, a plane ride and a song

A brilliant book for fans of Lemony Snicket!

This is such an adorable introduction to fantasy for middle grade readers.  It has a fairy tale vibe to the story telling quality but also takes the world that children are familiar with and makes some clever changes that add a magical and fantasy element to it without it coming to complicated and overwhelming.  The setting is well described and

Although there is an ongoing plot running through the entire book (which is about 100 pages and a perfect length for the younger end of Middle Grade), each chapter in itself is like a separate adventure – a little like The Faraway Tree books.  This makes it perfect for bedtime reading independently or as a story to share.  Despite being short – it is a fast paced story and opens up for lots of discussion to extend some aspects such as the move from Dragon River and how the children may feel.

The brilliant illustrations bring the story to life.  Realistic pencil sketch style illustrations help children to picture the world and the characters so well.

As a teacher I would use this as a stimulus to add in additional adventures using the existing characters and setting or use it to encourage children to create their own fantasy worlds by making small changes to the real world.  Oh and the dragons, all sorts of writing and activities involving dragons can be done too.

This is a great little introduction to fantasy at a young age – give it a try!

His most high profile work is creating the soft scuplted foam face make up and the mask for the Phantom in productions of Phantom of the Opera. [Although of course not right now]

He has created award winning lifelike pelican puppets for a Kit Kat commercial which was shown in Germany.

The London company Applied Arts, established by Bob, is now run by his colleague Mark, who is currently working on a new production of  the musical Cats opening in South Korea in the autumn. [www.appliedarts.co.uk]

Bob has judged  Stage Magician of the Year for the Magic Circle.

In recent years Bob has worked with both Derren Brown and Dynamo to develop ideas for their stage shows.

He is married to Kate has 3 children and 4 grandchildren with another on the way.

He has worked in the West Indies developing a puppet show for the BBC. After making a pilot programme, Tropical Island sadly lost out to the Tweenies.

Bob and his company have created work for musicians as diverse as Take That, the John Wilson orchestra and French singer Maxime de Forestier.

In lockdown he has been making visor frames for health care workers using his home 3d printer.

BACKGROUND INFORMATION TO THE BOOK DRAGON RIVER BY ROB SAUNDERS

I’d thought for a while that I would like to write a story that involved people who made things. Not in any way about the details of making but a story that involved them. I came to realise though, that my problem solving/making brain used up too much time and energy to start writing. I also found out that writing takes more focus and effort than I’d realised or appreciated. So it was only when I had to take some time out from my professional work that I began to think seriously about the story more and actually get writing it.

I was inspired by legend and lore…

Having sculpted a dragon as a roof decoration I began to wonder if a Dragon could be part of the story. I was planning at the time to write a short novel for the 8-13 age group so I researched some dragon stories. One I came across was from ancient China, generally called the Boy and the Pearl and my rewriting of the tale became the first chapter of my book Dragon River. I involved a family  surnamed Drako – It’s Esperanto for Dragon and sounded as if it could belong anywhere. The mother and father I named Sebille and Lancelot and their two twin children, Gal -short for Galahad – and Sally. The first three names are from Arthurian legend, I liked the hint that this was to be some kind of allegory. I had a back story to Sally, I imagined her as a forthright young child, initially called Guinevere, who took against  having it shortened to Gwinny, and firmly told her mother that she was now called Sally, and it stuck.

I set this first chapter in an idyllic small remote town called Brilliana. This relates to a history of the English civil war which includes the story of Brilliana Hartley. An unusual name, a strong independent woman, and a good name for a town. Early on I felt Brilliana could be anywhere and restricted it to only having electricity as power. This was supplied by a hydroelectric power plant powered by the river coming from the mountains above the town. I named this the Dragon River and realised  it was a good title for the book..

Migration and the maker…

As the first chapter finishes, there have been problems and the story moves on to having a theme of migration, and as in many stories a family member leaves to find work. This involves a long journey to the city of Daydon where Lancelot’s skills in making quickly gain him work. This is one of the useful factors of having making skills …..if you have the knowledge you can work anywhere, as long as someone wants what you make. The buyer doesn’t need or want to know who you are, where you came from or what language you speak; they just want the objects you’ve created.

The book continues with a migration story, as the family starts to establish themselves in the city of Daydon. This involves an episode of bullying and the difficulties of assimilating. Their creative skills help them through this and at times of jeopardy their talismanic dragon Gallo is on hand.  They have problems with the local bureaucracy and we meet the Purkisses, fellow immigrants, corruptly buying themselves into a position of authority. Their humourless philistine thinking causes upset and annoyance.

The Drakos establish themselves as successful makers for the theatres of the city. Writing about what I know is central to this. My own skills led me to establish  Applied Arts in London that has a reputation for creating  3 dimensional creative work for Uk and international  theatre and television. They set up a studio on the island of Huffel connected to the city via a single bridge. I established Huffel to signify how artists, designers and makers are somehow separate and also need a secure place to prosper. At the centre of Huffel is Supply st., where anything needed for their work can be bought, and the University where art engineering and other skills and techniques are taught. Huffel Island is my dream place to work.

The closest I got to it was the time I spent in the Clerkenwell workshops in London which was full of crafts and trades,  from garment makers, braid makers,  model makers,  carpenters, wood turners,  jewellers,  metal polishers,  antique restorers and  more.

When Sally unexpectedly becomes the guardian for an abandoned child she has to get back to Brilliana in a rush and here I had a dilemma as there was only the long train ride to get there. So I broke my self imposed rule that only electric power was available  and decided she could fly. I imposed a rule that the small plane was only allowed to fly with a full roster of passengers.

A magical tale for unprecedented times…

One day I hope to be able to write a song. Lancelot discovers he can and is encouraged by the singer Solange Luna this leads to the staging of a successful musical called inevitably I suppose ‘Dragon River’ and the story ends. The best entertainment engages us, helps us think about life and get through difficult times. Gallo the dragon, the saviour in the story becomes a puppet in the show.

Once I’d finished writing the manuscript I began to consider some illustrations. I knew the story needed them to bring out the characters more and give some sense of place. My own drawing skills aren’t up to the task. I can draw but for me it’s a stage in the production of 3 dimensional work. I looked online at various illustrators’ work but then remembered Gillian Martin. I’d worked with her before on a project about a character called Blacksmith Bill for a television series. Although there was interest from the BBC it didn’t materialise and we lost touch. I did remember her uncanny ability to bring characters to life. I tracked her down, she was pleased to get involved so I sent her the manuscript and a while later got the first sketch  back. It was of Sally and Gal in Brilliana. It was exactly in the style I’d  imagined for the book. We discussed the characters and Gillian made alterations. For example I wanted Sebille to look more interesting, and having always thought that the book was set somewhere in the middle east she became as we see her now.  After several months of drawing, reviewing and, with alterations made, the illustrations were finished and so enhanced the text I made the decision to go ahead with publishing the book.