Today I am honoured to be joining the blog tour  for 30 Days in June by Chris Westlake. Thanks to Emma at https://damppebbles.com/damppebbles-blog-tours/ for organising this tour and to Chris Westlake for a copy of this novel in exchange for an honest review.

This post may contain Amazon Affiliate Links which means that if you purchase an item from a link on my site, I get a small commission at no cost to you. 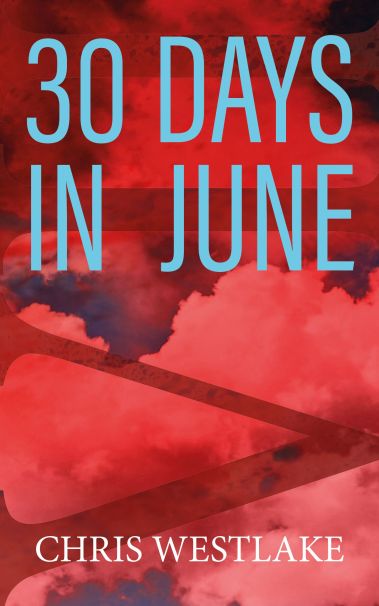 On the 1st day of June 1988, the residents of south Wales were thrown into a state of panic when a married couple were brutally murdered in their own home. The killer, nicknamed Spartacus by the media, did not flee the scene immediately; instead, he stayed to carve Roman Numerals onto his victims’ chests.

This was the beginning of a month-long killing spree, each murder taking a step closer to home.

Seventeen-year-old Jeffrey Allen was to be the final victim, on the final day of the month. Instead, he became the only survivor, and the only real witness. The killings ended as suddenly as they began. Jeffrey relocated to London, changing his name, and his identity, to Marcus Clancy. His past life became merely a dark secret.

On 1st June 2018, 30 years to the day since the first killing, a mysterious figure refers to Marcus by his old name, through closing lift doors.

Is Spartacus back? If so, has he returned to finish what he failed to do thirty years ago?

And so begins 30 days of terror for Marcus Clancy, culminating in dramatic fashion on the final day of June.

30 DAYS IN JUNE is Chris Westlake’s third novel, and his first crime thriller. He is currently writing his second crime thriller and is on schedule to have it completed in 2020.

Well when you begin a novel with an opening chapter like that you know you’re in for a thrilling ride. I think knowing from very early on that you’re in countdown mode gives this novel a tense atmosphere and a feeling that something is coming, but you don’t know what.

The novel tells the story through the days of June in two different timelines – 1988 and 2008.  In June 1988, a killer is on a spree with Jeffrey Allen being his last and only surviving victim.  Fast forward 20 years and Jeffrey is living with a new identity (Marcus Clancy) and he hears his old name for the first time in 20 years.  At first Marcus tries to convince himself there’s nothing in it but it’s the beginning of 30 days of sheer terror.

The narrative is in chronological order but flits between events of 1988 and 2008, telling of the initial reign of terror and in the present, Marcus’s story.  Marcus isn’t the easiest character to connect with and I think this has been done on purpose.  Someone who has been through an horrific experience and has had to leave their whole identity is unlikely to put themselves fully out there emotionally and may not be the most social and trusting character.  With this perspective I think Marcus is well written and also his character and personality doesn’t overpower the plot.  His vulnerability is clear and this adds to building the tension.  It becomes obvious as the time goes by that his initial cool and calm exterior begins to slip and he is no longer in control of his emotions and anxiety.

The plot and suspense build throughout the story as we discover more about Jeffrey’s experience through the flashbacks.  The present narrative makes for tense reading in places and there are definitely some twists that I wasn’t expecting.  It’s an intriguing plot that pulls you along to a tense and exciting ending.

I really enjoyed this novel and definitely look forward to reading more by this author. Chris has written three novels. 30 DAYS IN JUNE is his first crime thriller. He is currently writing his second thriller, on schedule to be completed in 2020. He is determined to write many, many more – his main regret is that he didn’t start writing earlier.

Chris considers himself to be a developing author. He is always looking to improve, to make his next novel even better than the last. He is continuously experimenting with different styles, different genres.

You can contact Chris at chriswestlakeauthor@hotmail.co.uk . He would love to hear from you.

Published in paperback and digital formats on 15th December 2019.