Today on my blog I’m really honoured to be hosting reviews of The Helping Hands Stories, created by Sarah, Duchess of York.  Thank you to Anne Cater for organising this tour and to www.helpinghandsstories.com.

The series tackles a variety of real issues that are faced by children today.  Each book overs a separate issue and I love that there is advice for parents who may have children in these situations at the back of each book – written by a child psychologist.  They are a great way to explore issues together through the safe world of story telling and fictional characters.  The characters are easy for children to identify with and relate to.  The advice given in each book is practical and simple.

The illustrations help to bring each story to life.  They are colourful and bright and will support children in their understanding and discussion.

This is such a helpful and important series for children and parents to share together.  As a teacher it is a great resource for schools to use for discussion points and to explore the feelings of all the characters and for children to discuss what they would do.

James is being treated unkindly by other boys in his school.  The treatment turns more aggressive but James doesn’t know who to tell.  Luckily he has a good fiend to give him some advice.

What I love about James’s story is that the illustrations show older boys, making this book more appealing to an older group of children.  It’s a great advocate for parents and child working together to overcome a problem and really promotes that relationship. 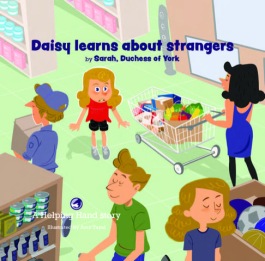 I don’t really know many parents whose child hasn’t made a dash for it in a public place.  Daisy’s story is great for explaining to children the dangers of wondering off alone but more importantly, I think, how to deal with it if it happens.

This story really opens up discussion about who a safe adult may be in times of need and develops a set of simple rules for children to remember. 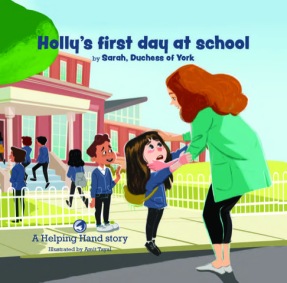 Moving schools can be quite nerve-wracking and traumatic for some children and Holly’s story helps children to explore those feelings and realise that it’s normal and ok.  It also allows other children to explore what a first day may be like for another child and really supports work in PSHCE lessons.

Together these books make a great resource for supporting children to explore issues they may be facing or to discuss how they can help others in these positions.  I adore them and hope other titles are in the pipeline.

The Duchess is widely admired for her “comeback spirit” and for overcoming formidable obstacles to succeed as a good mother who has worked hard to support her children, a survivor, businesswoman and humanitarian.

In 1993 she founded Children in Crisis (www.childrenincrisis.org.uk) and the charity has educated over 1.4 million children, trained over 18,000 teachers, built 57 schools and supports hundreds of schools on a yearly basis. Recently CIC merged with Street Child and The Duchess is Founder Patron, remaining active in its mission to provide education to forgotten children around the world. She has recently returned from visiting Street Child’s projects in Nepal and Sierra Leone, supporting the most marginalised into education and out of bonded labour.

The Duchess has published over 52 books including two autobiographies and titles dealing with health, empowerment, history, art, as well as children’s stories. Her children’s books include the series of ‘Budgie the Little Helicopter’, adapted into a highly successful animated series on US primetime Fox and her children’s book ‘Tea for Ruby’, published by Simon and Schuster had it’s debut at the top of the New York Times bestseller list.

The subject of countless media interviews herself, The Duchess has also found success as a reporter and presenter. In America, she has been a special correspondent for NBC’s Today show and has presented specials and documentaries on ABC, FOX, and CNN. In Britain, she has presented and coproduced specials for ITV, BBC, and Sky TV. She has served as guest editor on BBC Radio 4 Today programme and has regularly contributed to BBC Radio 2’s primetime lifestyle show “Steve Wright”.

She conceived the film, and produced alongside Martin Scorsese, ‘The Young Victoria’, a period romance based on the early life of Queen Victoria starring Emily Blunt and Rupert Friend and scripted by Julian Fellowes. She has written two books on the subject, ‘Travels with Queen Victoria’ and ‘Victoria and Albert: Family Life at Osborne House’. The Young Victoria was released in the US, UK, Australia, France amongst other territories and it was the closing film at the Toronto Film Festival in September 2009.

She devotes much of her time to promoting wellness and children’s causes. The ‘Helping Hand’ series of books is designed to introduce children to the issues they all confront as they grow old, through storytelling and to support their parents with advice provided by a leading child psychologist. For 10 years she was the highly successful US spokesperson for Weight Watchers International where she distinguished herself as a wellness advocate and a spokesperson for the American Heart Association. She has recently been asked to lead a campaign highlighting women and heart disease by The British Heart Foundation.

She is a passionate supporter of a number of charities including The Teenage Cancer Trust and Teen Cancer America, Julia’s House, The British Heart Foundation and The Children’s Air Ambulance. She also champions Key to Freedom, a business structure initiative set up to support the Women’s Interlink Foundation (WIF) by giving vulnerable young women a platform to sell their products. WIF works across West Bengal, India, helping these women develop skills to earn an income. She has just returned from a visit to The Bethlehem Arab Society for Rehabilitation Hospital (BASR) where, as Patron, she is spearheading a campaign to establish a cardiology department to include a heart attack centre and rehabilitation.