Thank you to Rachel at Rachel’s Random Resources for organising this tour and to Alex Khan, Hera and #netgally for a copy of this book in exchange for an honest and unbiased review. 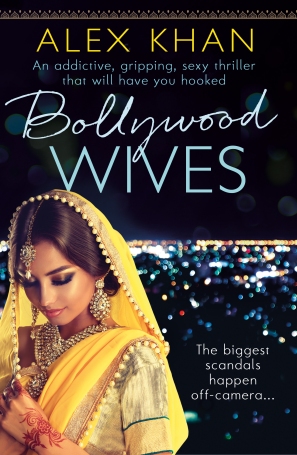 Zara Das is Bollywood’s hottest property, her every move watched by the eyes of the press. Riding high from the success of a string of blockbusters, she has the world at her feet, but the scandal from her latest film threatens to dethrone her as Bollywood’s reigning queen.

So when superstar director Raj Dillon stages a lavish retelling of Pride and Prejudice, moving the shoot from Mumbai’s soundstages to London, Zara knows this is the role that could put her back on top. Coming with them are the Bollywood Wives – Jackie, Sasha, and Rani – bringing their own off-screen drama.

But behind the diamonds, designer clothes and seven-star hotels lies the truth of how Zara reached the top. And when a dead body is found in her hotel room, it seems that someone is determined to take Zara down – and will stop at nothing to expose her darkest secrets.

Zara has spent years running from her past. But now it’s caught up with her…

A sexy, gripping, scandalous novel set in the world of Bollywood – fans of Jackie Collins, Crazy Rich Asians and Lauren Weisberger won’t be able to put this one down.

As a young adult I used to devour Jackie Collins’s novels and I never realised how much I missed that style of story….until now.

Bollywood Wives is a racy and glamorous tale of love, deceit and money. It was perfect for an indulgent getaway into a world I’ll never be part of and once I started there was no stopping me until I’d finished.

Initially I found the character of Zara Das quite unlikeable but as her character developed it became clear why she put on an act and that she was a completely different person underneath the facade. She also provides a strong feminist voice throught the narrative.

The backdrop for this story is pure luxury and fantasy. But underneath all the glitter and glitz lies a darker side that the public don’t see. Alex Khan delves into this aspect of fame and does a great job of highlighting some real life issues around exploitation and the media.

A sizzling and fast paced novel with plenty of surprises.

Alex Khan has spent his life dreaming of writing and starring in Bollywood movies while traveling the world visiting some of the most glamorous and exciting locations. Moonlighting as a crime writer he finally got the courage to pen the novel he wanted to write all his life-Bollywood Wives. Taking you into the glamorous sexy thrilling environment of the world’s biggest movie stars and the secrets they hide.