One Last Prayer For The Rays by Wes Markin – Blog Tour

Thank You to Rachel at Rachel’s Random Resourcdes for oganising this fantastic tour and to Wes Markin for an ARC copy of this book in exchange for an honest and unbiased review. 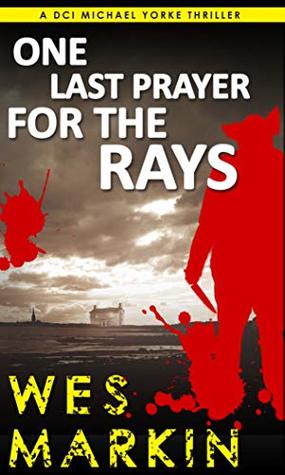 DCI Michael Yorke faces his most harrowing case yet.

When 12-year-old Paul disappears from school, Yorke’s only clue is a pool of animal blood. Fearing the worst, he turns toward the most obvious suspect, recently released local murderer, Thomas Ray.

But as the snow in Salisbury worsens, Ray’s mutilated body is discovered, and Yorke is left with no choice but to journey into the sinister heart of a demented family that has plagued the community for generations. Can he save the boy? Or will the evil he discovers changes him forever?

One Last Prayer for the Rays introducing DCI Michael Yorke.

This is the first installment of what I hope will be many featuring DCI Yorke and his team.

Yorke is called to investigate the disappearance of Paul Ray, a young boy from a notorious family who have committed unspeakable acts in the past.  When the prime suspect is found brutally murdered, the police have a race against time to save Paul’s life.

Fast paced and constantly gathering speed as each page turns, this novel will keep you awake at night.  After reading the first quarter, I fell to sleep with pictures of terrifying pig masks floating in front of my eyes and then spent the next day with the my Kindle glued to my hands in a race to get finished and find out where I was being led.  It’s less a case of who? and more a case of why? in this story and it keeps you guessing for a considerable length of time.

The story is told from several perspectives; Paul’s, the investigation and snippets from other characters too.  As the police work through their limited evidence and knowledge, the reader catches a glimpse into the lives of additional characters.  Paul’s story is the most terrifying and the writer creates such a malevolent setting to tell it in.  The police investigation has a balance of procedural drama and delving into the personal lives of the officers.  I’m assuming we will see more of these characters in coming novels and this installment has set the groundwork really well.   My favourite character is that of Lacey Ray (I’m not sure what that says about me) – a rare type of character and even more unusual for these characteristics to belong to a female protagonist in books.

There is a lot of blood and unusual methods in this novel and I highly recommend it for fans of darker police procedurals that focus on the killer as much as the investigation.

Wes Markin is a hyperactive English teacher, who loves writing crime fiction with a twist of the macabre.

​Having released One Last Prayer for the Rays he is now working on the second instalment of DCI Michael Yorke’s wild ride, The Repenting Serpent. He is also the author of Defined, a prequel to his DCI Yorke novels, which takes the reader back to his blood-soaked university days.​​

Born in 1978, Wes grew up in Manchester, UK. After graduating from Leeds University, he spent fifteen years as a teacher of English, and has taught in Thailand, Malaysia and China. Now as a teacher, writer, husband and father, he is currently living in Harrogate, UK.​