So the chances are that if you are active enough on social media to be reading my blog then you’ve at least heard about Bird Box.  Over the festive period Twitter was exploding with the hashtag and every man and their dog were tweeting about their opinions or sharing Facebook memes galore.

If you haven’t caught a glimpse of the storyline or the trailer then I’ve included it below for your viewing pleasure.

The story switches between a duel timeline.  The main story follows the early events of the ‘event’.

Malorie is a single, lady who seems indifferent to the fact that she is pregnant.  A visit from her sister reveals that in several countries, something strange is happening and people are committing suicide in bizarre circumstances.  She attends a hospital visit with her sister and is witness to a young woman committing suicide in this way.  Malorie returns to car and they begin to drive to their childhood home for safety but tragically, her sister falls victim, as do many other people in the street.  Luckily, Malorie is rescued by a local man and finds herself shacked up with a group of strangers.  We learn that people can only be affected by the ‘monster’ if they look at it and so begins the fight for survival – minus sight.

In between the development of the main story, we are also shown 5 years into the future with Malorie and two children making a journey along the river to a safe haven they discovered over CB radio.  The journey is over 2 days long and will mean that all 3 travellers will need to remain blindfolded throughout. 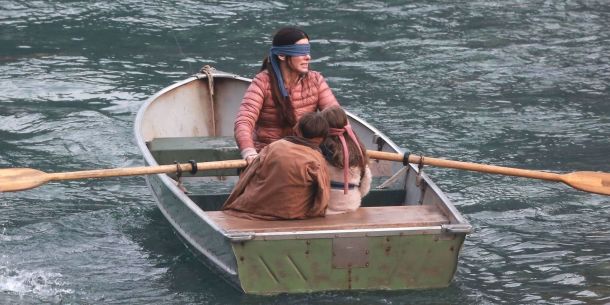 Actually, the title of this section is a little misleading because many of these thoughts were from my husband, obviously the deep thinker in the marriage.

On the surface, this is a very well written horror/psychological thriller that plays on the terror of the unknown.  Personally, I’m never scared by the monsters etc. in horror films but those that choose to torture with an unknown entity, that’s what scares me!

As usual with a group of previously unknown people thrown together in panic and chaos.  There’s the element of human interaction and how morals and ethics can often go out of the window and give way to the survival and self-preservation instinct. Let’s be totally honest here – most of us would be trying to preserve our stocks and wellbeing rather than out in the streets helping others.

Motherhood plays a strong role in the story telling.  We see the development of Malorie as a mother.  When pregnant, she seems to show no sadness or joy over her position and once she has given birth most people are of the opinion she remains detached.  However, we see her raising two, un-named children, despite only giving birth to one, they are healthy, well-educated and well prepared for the situation.  Malorie also is willing to make a treacherous journey along the river to ensure their survival.  She may not have been skipping around with them and reading fluffy bed time stories but she did an awesome job of giving them the tools needed.

And here’s the main theme.

This film is a complete homage to mental health and how we, as people react towards it.

The blindfold represents how the majority of the world walk around.  They’re aware of its existence but if they don’t look at or acknowledge it then it won’t affect them.

In the film we meet groups of people who are affected differently by seeing the ‘monster’.  These people were already diagnosed with mental illnesses and perceived the ‘visions’ as beautiful.  This is their world and how they view it and are finding comfort and beauty in that.

I’ve seen this film compared to A Quiet Place a lot and they do have similar themes.  The difference is – A Quiet Place was much more intense and I don’t think I breathed for most of the film.  It was extremely well produced and acted however, it was a film without a message.  Bird Box might not have had the same level of intensity (for me) but it has a much deeper layer of meaning.

Have you seen it?  I’d love to know your opinions in the comments.